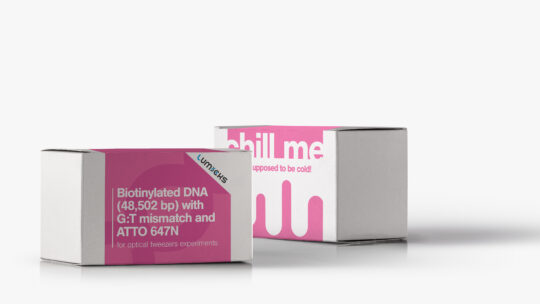 This biotinylated double-stranded λ-DNA (48,502 bp) contains a G:T mismatch at location 33,787 bp and an ATTO 647N fluorophore at location 44,826 bp. The lesion is the single most common mutation in human DNA. The lesion allows studying DNA mismatch repair mechanisms such as nucleotide excision repair and base excision repair. The fluorophore facilitates determination of the tether directionality, localization of the imaged protein on the DNA sequence and can be used to bring the sample into focus. For visualizing the fluorophore, the 638/639 nm laser of the C-Trap is required.

The other available lesions are U:A mismatch, U:G mismatch and O6 Methyl dG. For request on other DNA lesions, please contact store@lumicks.com.

Estimated for 20 experimental sessions on the C-Trap.