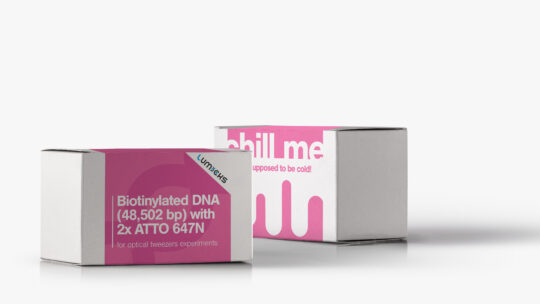 This biotinylated double-stranded λ-DNA (48,502 bp) is labeled with two ATTO 647N fluorophores, one at position 33,786 bp and one at position 44,826 bp. This will facilitate fluorescence imaging and precise localization of the imaged proteins in the DNA sequence. The DNA is labeled with 3 biotins on each 3’ end to enable tethering in optical tweezers. The spacing between the two fluorophores can be used as a ruler to precisely localize the imaged proteins in the DNA sequence. Typically, 70% of the tethers contain both fluorophores. For visualizing the fluorophores, the 638/639 nm laser of the C-Trap is required.

To study DNA-repair using optical tweezers, also have a look at the DNA lesion kits.

Estimated for 20 experimental sessions on the C-Trap.

Want to use this product in practice?

Find out more about the C-Trap here.